Freaky Friday Files – The Case of the Rattling AC Unit

Sometimes our commercial HVAC company in NYC gets some interesting phone calls from people looking for us to solve problems with their air conditioning and heating systems. Quite often when we show up to service a cooling or heating system problem, it’s a legitimate issue that just needs a little bit of TLC. But sometimes we find things that simply just can’t be explained. This is where the Freaky Friday Files comes into play.

Today’s episode – The Case of the ‘Rattling’ AC Unit

(Based on a True Story)

There is a residential and commercial AC service company based in Phoenix, Arizona that was contacted by a home owner to help solve an annoying problem with their AC system. It appeared that every time the AC system turned on during the afternoon, it would make a loud ‘rattling’ noise. We all know that an AC system is a mechanical unit that sometimes has moving parts that become loose that can cause rattling or other noises to occur. And when this AC repair company got the phone call – that’s exactly what they expected to find.

Here are a few potential issues that the AC repair company in Phoenix expected to find. 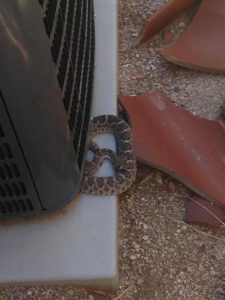 The technician arrived to the residence around 11:00 am and was preparing to shut off the power to the AC unit (which was located conveniently right next to the system) when he heard the rattling noise himself while the AC unit was running. He flipped the switch to shut if off – but strangely the noise kept coming from below the unit. Wanting to investigate further, he crawled onto his hands and knees to get a closer look under the unit.

Fortunately, being from Arizona, he knew that one of the best cooling spots for critters sometimes is under an AC Unit. That’s where he found the cause of the rattling noise – in a 5′ Rattle Snake. This picture is not the exact picture from this case of the Freaky Friday Files – however, it does go to show that sometimes you never know what you’re going to find during a commercial HVAC service call.