Most Bizarre HVAC Do It Yourself Failures

Everyone has that one family member that thinks they can fix anything. They never feel the need to call the professionals and their pretty much married to duct tape. In some cases they can look like heroes, fixing the TV right before the big game or even jumping your car when it won’t start. However, sometimes it’s just best to leave the tough stuff to the professionals. This is especially true when it comes to HVAC, as many do it yourself jobs just end in a failure. As a HVAC Maintenance Company in NYC We are amazed to see what people come up with. Here are the most bizarre (and humorous) HVAC Do It Yourself pictures we have ever seen.

Customer tried to install his own fan! 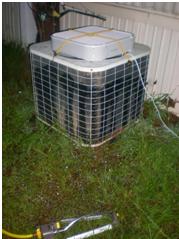 Talk about an A+ for creativity. Whoever thought of this probably had some background in HVAC. And no he is no trying to make the unit fly away. It looks like this persons fan in their condensing unit broke and he needed a way to cool down the Freon in the system. He placed what looks to be an attic fan on top of the condensing unit to blow air and replace the internal fan. They also placed their sprinkler by the unit to cool it down. This all looks great and smart but it will probably damage their unit more then they know. Calling an HVAC company would not only fix the problems but will probably cost them less. But then again taking the easy route is to easy for some people. Bizarre/Humorous Rating: 7.5/10

Customer tried to install his own duct work 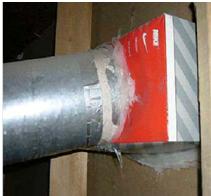 Nikes slogan is “Nike, Just Do It” however in this case please “Just Don’t Do It.” This person ran out of HVAC ductwork and decided to install a shoe box instead. This has to be a DIY job because no HVAC company would ever do that! In my house we use shoe boxes to hold shoes or for the kids to do a class project, they clearly had other plans.  I understand it’s a tough economy but please just buy some more ductwork. What’s next, a shoebox fish tank?
Bizarre/Humorous Rating: 9/10

Customer asked for an efficiency test

You can always spot out a Do It Yourself type of person immediately. It’s usually because they walk

around with a utility belt of duct tape as if their Batman. It would be impossible to talk about Do It Yourself jobs without including something with duct tape, so I included them all together.  I don’t know what it is with people and duct tape but I for one am not a fan. The crazy part is, it does work but for only a matter a time. Eventually the tape will dry up and loose its strength. I just hope for the sake of the house it doesn’t break down on a hot day. But for now “In Duct Tape We Trust”

Customer tried to rewire his unit 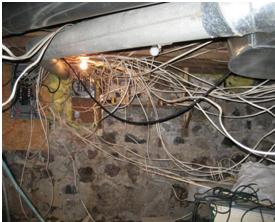 We got a call because someone AC wasn’t cooling. Our tech went down into the basement and saw
something like this. I’m not sure if there was a spaghetti food fight or he’s teaching his son to swing like Tarzan. He told the tech he did all the electrical work in the house himself, he was also really proud. It turned out the AC problem was actually caused due to the wiring. We recommended redoing all the wiring in the house. But hey, on the bright side the AC was fixed. Bizarre/Humorous Rating: 10/10

Please leave it to the professionals

Last but not least is my personal favorite, the man who fell in love with his AC unit; they have been 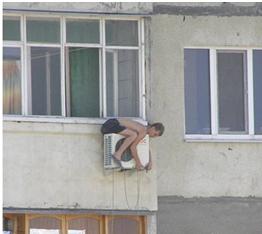 dating for 6 months now. That was a joke…I hope. I found this picture while roaming the internet one day.  He is clearly doing it himself, and only himself. We would all be just as proud if he was wearing a harness, but I guess that takes out the fun.  I’m just wondering what happends when a part breaks and he needs to open that up. Please next time don’t be a hero and just call the professionals. Especially because this hero can’t fly. Bizarre/Humorous Rating: 14/10
Prevent these DIY failures and ask about the different types of HVAC service contracts in NYC  that we offer.
Please share this post, comment on it, and keep reading!
5 Coolest Dog House Air Conditioning Systems! » « Stealing Copper From Air Conditioning Units – Huge Issue